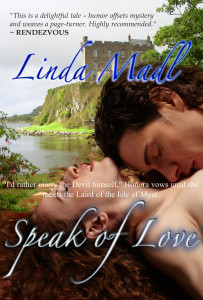 Honora, a duke’s daughter, knows better than to expect her marriage to be a love match, but her uncles’ choice of a vain, greedy widower won’t do either. She has her welfare and the future of her sisters to think of. “I’d rather marry the devil himself,” she tells them, and then she meets . . .

Brec McCloud, the mysterious new Laird of the Isle of Myst. He seeks a lady for his castle for his own dark reasons, and he is willing to give up much to win Lady Honora’s hand in marriage.

One suitor rejected and war on the horizon, Honora is forced to accept his magical courtship and passionate attentions. Ultimately she accepts his proposal of marriage which sets her on a journey to the western isles and world of healers, pirates, and sinister superstitions.

At the Laird’s ancestral home where she reigns as the lady of the castle, she discovers a kelpie, a fairy flag, a tale of murder and cruel betrayal. With a woman’s special strength, she fights for her Laird as an enemy’s lies threaten to tear them apart…before they can speak of love.